The Northwest Territories (NWT) is the ultimate downstream jurisdiction in the Mackenzie River Basin. Our waters can be impacted by management decisions in the upper basin which includes British Columbia, Alberta, Saskatchewan and the Yukon Territory.

Over the past several decades, increased development in upstream jurisdictions, including oil sands, pulp and paper, and existing and potential hydroelectric projects have raised concerns for Northerners about potential impacts to aquatic ecosystem health and subsistence harvesting of wildlife and fish in the Mackenzie River Basin.

The negotiation and implementation of bilateral water management agreements (bilateral agreements) with upstream jurisdictions is necessary to ensure we can achieve our vision that the waters of the NWT remain clean, abundant and productive for all time. Northern Voices, Northern Waters: NWT Water Stewardship Strategy (the Water Strategy), released in May 2010, was developed with extensive Aboriginal and public input and considers diverse environmental, cultural, social and economic interests. The Water Strategy helps to guide future water-related management actions in the NWT, including transboundary water discussions and negotiations, and includes a vision, goals and 'keys to success'.

What is the Mackenzie River Basin Transboundary Waters Master Agreement?

Discussions on the need for negotiating bilateral agreements on transboundary water management began as early as the 1970s when a number of large oil and gas, forestry/pulp and paper, and hydroelectric projects in the Mackenzie River Basin were believed to potentially affect waters of neighbouring jurisdictions.

In 1997, the Governments of Alberta, Saskatchewan, British Columbia, Yukon Territory, NWT and Canada signed the Mackenzie River Basin Transboundary Waters Master Agreement (the Master Agreement). This agreement commits all six governments to work towards cooperatively managing the water and aquatic ecosystems of the entire Mackenzie River Basin and makes provisions for the parties to develop bilateral water management agreements.

The Master Agreement commits the signatory jurisdictions to the following principles:

Resolve issues in a cooperative and harmonious manner.

What is a Bilateral Agreement?

A bilateral agreement is an arrangement between two parties.

Why are Bilateral Agreements Needed?

Cooperation with neighbouring jurisdictions is important for addressing transboundary concerns related to water management and ensuring the sustainability of our environment.

It is beneficial to establish agreements between jurisdictions so that, as a downstream jurisdiction, the NWT can be informed of development activity upstream. Also, a bilateral agreement will help ensure water and aquatic ecosystems within the Mackenzie River Basin are managed cooperatively, in a way that maintains healthy and diverse ecosystems. A common and agreed-to set of conditions regarding water quality, water quantity, fish and other aquatic life and monitoring will demonstrate how jurisdictional interests can be achieved.

What are Interest-based Negotiations?

Interest-based negotiations are a negotiating strategy where both sides start by sharing their interests, and then work towards an agreement that satisfies common interests and balances opposing interests. Through this process the interests of both parties are identified and the parties work together to agree on options that meet those interests.

NWT defined its negotiation principles and its preliminary interests based on the Mackenzie River Basin Transboundary Waters Master Agreement (1997), the Water Strategy, the treaties, the asserted rights of those without settled land claims, and the Gwich’in, Sahtu, and Tlicho Comprehensive Land Claims Agreements whereby “…waters which are on or flow through or are adjacent to [Gwich’in, Sahtu, Tlicho] lands remain substantially unaltered as to quality, quantity and rate of flow”.

NWT and other jurisdictions developed and discussed options for what they want their agreements to do and how decisions will be made under the agreements. NWT’s preferred options have been developed to meet NWT interests and NWT negotiation principles. Agreed-upon options are or will be set out in the final bilateral transboundary water management agreements between NWT-Alberta, NWT-British Columbia, NWT-Saskatchewan, and NWT-Yukon Territory.

What is the Status of Negotiations?

How is Engagement and Consultation Undertaken?

Aboriginal and public engagement on bilateral water agreements began in March 2012 with a letter from the GNWT Environment and Natural Resources Minister J.Michael Miltenberger that was sent to regional Aboriginal governments inviting comments and input on NWT negotiation principles and interests. A similar letter was sent to a broad public distribution list including all stakeholders in NWT water management.

Public engagement and formal Aboriginal government consultation on development of negotiation positions for the NWT-Alberta transboundary water agreement began in August 2012. There are consultation requirements as a result of Section 35 of the Constitution Act, and the Gwich’in, Sahtu, and Tlicho Land Claims Agreements which create the obligation of the GNWT to consult on the formulation of government positions on the management of water in a shared drainage basin before negotiating an agreement. Building on this process, in March 2014 ENR began consulting on development of negotiation positions for bilateral water management agreements with British Columbia, Saskatchewan, and Yukon Territory.

Further public engagement and Aboriginal government consultation will occur once Transboundary Water Agreement Intentions Documents have been drafted for NWT’s agreements with Saskatchewan and the re-negotiation of the existing agreement with the Yukon Territory. These Intentions Documents will highlight the main commitments that would be part of final agreements.

Who are the Members of the NWT Negotiation Team?

The current members of the NWT Negotiation Team are:

As of April 1, 2014, in accordance with the Land and Resources Devolution Agreement, Aboriginal Affairs and Northern Development Canada (AANDC) is no longer part of the transboundary water negotiations process.

Both Keys have associated Action Items and Key Performance Indicators. 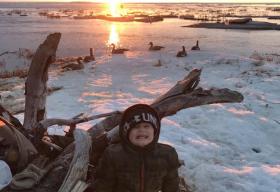 This website is a platform to share information and showcase initiatives related to water stewardship in the Northwest Territories. It details the achievements of the joint implementation of Northern Voices, Northern Waters: NWT Water Stewardship Strategy, in addition to providing current information about the importance of water, ecosystems, and watersheds in the NWT.

People are made up of about 70% water.