The main goals of the SRDP project are to:

Following the State of the Knowledge report, additional workshops and community meetings were held to develop a Vulnerability Assessment and to prioritize key community concerns in areas identified as vulnerable that required immediate follow-up research and monitoring.

The following key priorities for immediate research and monitoring were identified:

In order to address the information gap about fish health and contaminants, SRDP's first research project aimed to investigate contaminant levels in traditionally harvested fish species (including pickerel, jackfish, loche, whitefish and goldeye). This involved collecting fish samples on the Slave River and Delta at various locations over the course of a year (2011/2012), during all four seasons. Samples were then tested using a variety of metrics to determine presence and influence of specific contaminants (including hydrocarbons and metals) linked to upstream development activities.

Concerns about increasing contaminant concentrations in sediment loads from upstream development pressures have been raised by members of the SRDP. To address this concern, the SRDP worked with partners from Wilfrid Laurier University and the University of Waterloo and conducted a sediment core analysis to examine changes in metal and contaminant concentrations over time.

The SRDP and its initiatives address Keys to Success under the Know and Plan component. 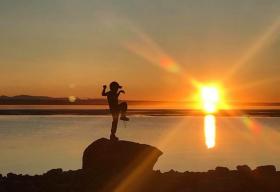 This website is a platform to share information and showcase initiatives related to water stewardship in the Northwest Territories. It details the achievements of the joint implementation of Northern Voices, Northern Waters: NWT Water Stewardship Strategy, in addition to providing current information about the importance of water, ecosystems, and watersheds in the NWT.

The Mackenzie River Basin is the largest drainage area at 1.8 million square kilometers. This basin is one fifth the size of Canada.