www.gov.nt.ca » Water Stewardship » Strategy » How the strategy was developed

How the strategy was developed

Water stewardship in the NWT

The commitment to develop a made-in-the-North water strategy to guide the use and management of NWT water resources stemmed from:

In 2008, the Government of the Northwest Territories (GNWT) and the Government of Canada started working with representatives from Indigenous governments to develop a water stewardship strategy to address these concerns. Regulatory boards, agencies, environmental organizations, industry, academic institutions and the general public have been involved in the process.

This partnership resulted in the NWT Water Stewardship Strategy, originally released in 2010 and updated in 2018. This document lays out a clear path to bring all levels of government, agencies and the public together to maintain clean, abundant and productive waters in the NWT.

Two conferences related to the development of the strategy took place in 2009: 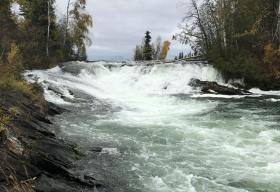 The Mackenzie River is Canada’s longest river at 4,241 km.